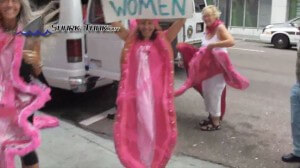 Such divinely sanctioned trolls as the Westboro Baptists have upped the ante on the protesting gig, but it seems they have nothing on Code Pink. This group, founded by political activist Medea Benjamin, stages its protests against Republicans, mostly, and characterizes their side of the abortion debate as defending woman against “The war against women.”

That explains why they were dressed as fluffy vaginas when republicans arrived Sunday night. The event was a bit anticlimactic as a couple Lynyrd Skynyrd concerts and the premiere of an anti-Occupy Wall Street movie, were among the events cancelled because of the hurricane Isaac, and as the official proceedings of the Republican convention were also delayed, the vagina-clad protesters were left by the weather a bit moist and disappointed.

It’s gotten harder to stage a decent protest, complains Benjamin. The increasing presence of police has left them feeling a bit whipped. “The chief of police came to our rally today, and she was very nice and tried to reassure us, but we’ve been surrounded by National Guard, police on bicycles, police on foot, police in cars and even tanks, and all the helicopters flying overhead, so it does have a dampening effect on us.”


Dampened, but not excited, by all the men and women in uniform, they did nevertheless make a bit of a splash when 400 protesters pressed up to Tropicana Field, the stadium where the Tampa Bay Rays play, where Republicans politely ignored them as they headed to their own revelry of song, dance, and colorful costumes. At the event they chanted the Pledge of Allegiance, and dressed in red, white and blue, or in cavalry uniforms, kilts, and in honor of the Tampa Bay Buccaneers, as pirates. Rodney Atkins sang songs about “Freedom, family, and the good Lord — and the right to bear arms.”

But Code Pink protesters wouldn’t be beat, and some were arrested as they entered the event attempting to arrest former Secretary of State Condoleezza Rice, carrying handcuffs, only to be rebuffed by police for trespassing on private property. The pink protesters then laid on the sidewalk under sheets colored to look blood-spattered, to protest Rice’s involvement in starting the Iraq war. The group says it will try to arrest other members of the George W. Bush administration.