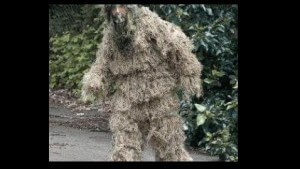 The staging of big foot hoaxes has a long tradition in backwater America, and it can bring renown and glory to those who manage to convince their neighbors that they have witnessed the presence of a Sasquatch — but it does come with risks. You could, after all, get caught as a fake, exposed as a liar, reviled as a cheat, or run over by a couple of teenage girls.

Randy Lee Tenley, 44, realized the possibility of the last option when he donned a “ghillie” suit, military camouflage made to make a sniper look like innocent foliage, and paraded down a busy highway to inspire a Sasquatch sighting. He stood in the right hand lane of U.S. Highway 93 south of Kalispell Sunday night, when it appears his camouflage worked a little too well, and a car accidently hit him. Shortly after, a second car also hit him as a he lay on the ground. The drivers were two teenage girls, 15 and 17. He did not survive.

“He was trying to make people think he was Sasquatch so people would call in a Sasquatch sighting,” explained Montana Highway Patrol Trooper Jim Schneider. “You can’t make it up. I haven’t seen or heard of anything like this before. Obviously, his suit made it difficult for people to see him. Alcohol may have been a factor. Impairment is up in the air.”


Further tests will determine if there was alcohol in his system.