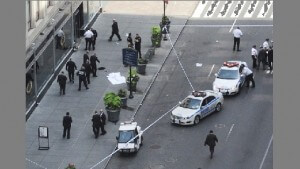 An attempt for revenge near New York’s Empire State Building left a shooter and his intended target dead, with eight others wounded. It is unclear whether the wounded bystanders, who were only “grazed” and not critically hurt, were hit from the shooter’s assault on police, or their return fire. This marks the third mass shooting in America this year, and the second high-profile act of violence in NYC, following a public fight between a knife-wielding man and police two weeks ago.

Jeffrey Johnson, the shooter, was a fashion accessories designer who was fired a year ago. He had returned at 9 a.m. this morning to settle the score, shooting his 41-year-old former coworker three times with a .45 caliber handgun, killing him.

When the police approached, he turned his gun on them, and between fire and return fire, 8 bystanders were shot — including two women and six men, all adults — before police killed Johnson.


“I heard the gunshots. It was like pop, pop, pop. It was definitely a bunch,” said Dahlia Anister, 33, who works nearby the Empire State building.

“I was scared and shocked and literally shaking,” said Rebecca Fox, 27, who initially expected that a celebrity sighting was behind the ruckus until she saw a woman shot in the foot and a dead man on the ground. “It was like CSI, but it was real.”

The surreal, television-like effect included the closing of 34th street, one of the busiest in NYC, compounded with police helicopters buzzing overhead and crowds of officers at the crime scene, fenced in by a mob of curious onlookers.


Despite such high profile incidents as this and the knife wielder, 2012 has had a record low of homicides in NYC, following a trend that has been going for years. Mayor Michael Bloomberg calls New York the safest big city in America, but nevertheless took the moment to comment on gun control.

“We are not immune to the national problem of gun violence,” he said, and is himself a leading national proponent of gun control and the founder of the group Mayors Against Illegal Guns.


The talk of gun control has been intensified by the two other high profile shootings, including the killing of 12 at a shooting at a crowded cinema in Colorado at the premiere of “Dark Knight,” and the killing of 6 at an attack on a Sikh temple in Wisconsin. Though over all homicide is down in many places, the high-profile shootings capture media attention. The shooting in NYC this morning, however, was not intended to be a mass shooting, but apparently an attempt to murder a single former coworker.