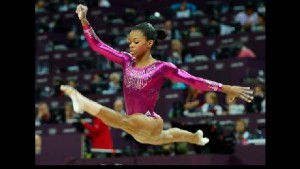 There wasn’t enough chanting of USA, there was enough stars and stripes on the outfits, there weren’t enough flags waived, and when Gabby Douglas had her moment of glory, she was donned in hot pink.

“You know, Gabby had that great moment, and everyone was so excited, and she’s in hot pink — and that’s her prerogative,” initiated Camerota, to which Webb asked rhetorically, “What’s wrong with showing some pride?” He answered this question by referencing the criticism that the American Spirit has been demoralized over the years, saying we now have a “kind of soft anti-American feeling that Americans can’t show their exceptionalism.”


American exceptionalism is a sentiment stretching back as early as the first Puritan settlers who viewed their exodus from England as a cosmically significant moment, and referred to America as a “light on the hill,” a place where God’s will is honored for sovereign. The same sentiment fueled the notion of Manifest Destiny in our expansion across the continent, and also is implied in Lincoln’s Gettysburg Address where he says,

“Four score and seven years ago our fathers brought forth on this continent a new nation, conceived in liberty, and dedicated to the proposition that all men are created equal.

“Now we are engaged in a great civil war, testing whether that nation, or any nation, so conceived and so dedicated, can long endure.”


The idea that America is central to God’s plan is a key ingredient to Mormonism and Mormon scripture as well, and also characterizes the poems of Whitman, our national poet, who said, “Of all nations the United States with veins full of poetical stuff .. will have the greatest [poets] and use them the greatest.” The sentiment, in fact, has inspired countless men and women, but has been under attack, partly by university professors and historical revisionists.

Webb didn’t explicitly reference any of this, but did wave a little American flag himself, and lamented that though “We’re a very nationalistic nation,” nevertheless “we’ve also lost over time that jingoistic feeling.”


This is in contradistinction to China, whom they noted wore their nationalistic color of red, among the other more patriotic nations.