Got a tip?
Home » Breaking News » Michael Phelps Intends to End His Olympic Career as the All Time Most Medaled Athlete 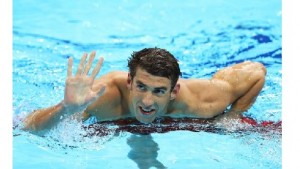 Michael Phelps is facing the last day of his Olympic Career before retirement, tackling his last challenge, to win two more medals, which, if he succeeds, will give him the most Olympic medals of any Olympic athlete. He has long had a passion to be the first man to do something, to make his place in history, taking for his hero at a young age Michael Jordan.

“On and off the court, the guy made basketball what it is,” said Phelps. “I think one of the coolest things that I loved about him was it didn’t matter what he had going on off the court or if he was sick or this, that. He never used an excuse. He came out every single night on the court and did what he had to get his job done. That’s what champions do. It doesn’t matter what else is going on when you walk in to your arena, whatever you excel at, you’re there to take care of the job that you have to do.”

Such incredible focus on the task at hand, perhaps characteristic of all Olympic athletes, is something so normal, every day, and to be expected for Phelps, that he could honestly say “I consider myself normal. I’ve spent 20 years in the pool. I consider that something that’s normal.” Indeed, when it is all you do, and when your peers are also contenders for the gold, this appears the most natural thing there is.

But before the Olympiad has earned such lackadaisical laziness, he must face his final challenge. If he can win the medals he is after, he will have outdone Larisa Latynina, the Soviet gymnast who garnered 18 Olympic medals, and also have become the first male swimmer to win the same event in three Olympics. Tuesday night he is competing in the 200 fly and the 800 free relay. That he is ending his Olympic career with the 200-fly strikes him as fitting, since that was the event that the slender 15-year-old Phelps first qualified for back in 2000.

Update: Michael Phelps indeed realized his dream Tuesday night by earning a silver in the 200-meter butterfly and a gold the 4X200 freestyle relay, pushing his grand total of medals to 19, more than any other Olympic athlete has ever achieved. He could not have hoped for a more triumphant ending of his Olympic career, fulfilling his mission to do what no other man has done, and on the very last week before his retirement.