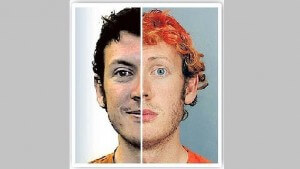 James Holmes, the alleged shooter at the Colorado movie theater’s premier of the new Batman movie on July 20, has been charged with 142 counts this Monday ranging from 24 counts of murder charges — he killed 12 people and injured 58 more — and 116 counts of attempted murder, as well as some counts regarding his booby-trapped apartment. There is still no word from authorities regarding motive, nor is it clear whether Holmes’ defense will take what appears their only safe route: plea not guilty be reason of insanity.

Whether the prosecution will seek the death penalty is also not settled, as the Arapahoe Country District Attorney Carol Chambers said that such a decision would involve input from the victims and families involved.

Unlike Holmes’s first court appearance, at which point the orange haired ex-graduate student appeared dazed, nonverbal, and perhaps sleepy, there was no camera crew to check up on his current state of appearance: the defense had secured their request to bar media intrusion so that the case wouldn’t be compromised. Holmes was led to the court through an underground tunnel. He has been held in isolation and without bail since his arrest.


The court has tightly pressured lawyers and law enforcement with gag orders to avoid leaking information, and they are investigating how news got out about Holmes’ sending a package to his psychiatrist at the University of Colorado Denver. The court claims that the reports that the package detailed plans of his attack were “inaccurate” as the parcel had not been opened by the time such news was distributed. Information about Holmes’ year in grad school is also being frozen, though those who knew him described him as somewhat awkward and fascinated by science — a description that could well fit most of Holmes’ peers who also joined the neuroscience doctoral program. CBS News, meanwhile, is challenging the judge’s sealing of the court file.

We are seeking a Contract Family Law Attorney! We are looking for someone who has a flexible schedul...