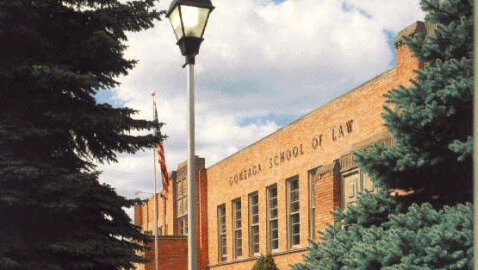 According to The Spokesman-Review, Timmy Nguyen, a Gonzaga University law student, made his first appearance on July 23, 2012, for allegedly crashing into a bicycle trailer carrying a two-year-old girl. The Gonzaga University law student, soon to turn age 23 this week, has no criminal record. The accident victim remained in intensive care at a Spokane, WA medical facility.


The Gonzaga University law student left jail after appearing before Spokane County Superior Court Judge Annette Plese. He was charged with hit-and-run and vehicular assault. According to The Spokesman-Review, he is not to go near alcohol, and is to return to court for an arraignment in early August 2012.

The Gonzaga University law school is located on the campus of Gonzaga University, in Spokane, WA, a metropolitan area with a four-season climate. The law student allegedly careened his Honda into a family riding bicycles in a Millwood, WA neighborhood last weekend right before 8 p.m. on Saturday. He crashed into and flattened a bicycle trailer carrying the two-year-old girl, law enforcement report.

According to court records prepared by the Spokane County SheriffŌĆÖs Office, the girlŌĆÖs dad towed the trailer behind his bicycle on East Maringo Drive approaching North Argonne Road, when the law studentŌĆÖs car turned the corner at high speed. The 2003 Honda Element swerved to the wrong side of the road and smashed into the trailer without halting.


The law student left the scene, police report, but witnesses tailed him to an apartment at East Wellesley Avenue and North Pasadena Lane and questioned him. The witnesses told law enforcement the student seemed intoxicated and yelled profanities when questioned, officials said.

The law student had difficulty standing on his own when police went to the scene. He cried after being arrested, deputies said. A blood sample was submitted for testing. He refused to speak to investigators.┬Ā However, he repeatedly asked if he was under arrest and informed them he was a law student.


The accident victim suffered fractures to her skull and wrist, sheriffŌĆÖs Cpl. David Thornburg reported. If she was not wearing her helmet, which burst into six pieces upon impact, her injuries probably would have been fatal, Thornburg stated.

Spokane offers opportunities for outdoor recreation and cultural activities. Spokane County commissioners unanimously passed an ordinance last year requiring people to wear helmets for bicycling and other wheel sports in unincorporated areas. When in an accident, helmets protect against head injuries.┬Ā Before going on a ride, wearing a helmet low in the front protects the forehead. Without a helmet, even after recovering from a bicycle accident, dead neurons in the brains from a concussion might lead to Alzheimer’s disease or dementia. The helmet law in Spokane applies to children 3 through 15 years old, but it carries no penalty if people do not follow the law, Thornburg said.

The law student is an intern for longtime Spokane lawyer Mark Vovos, who is running for Spokane County Superior Court. Vovos said he is going to attempt to represent the student himself. Vovos described the student as ŌĆ£a wonderful workerŌĆØ who is interning through a Gonzaga program.