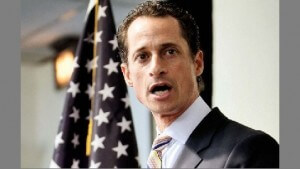 How long should a a former congressman hang low after public disgrace? Anthony Weiner, who resigned from congress in 2011 regarding what jokingly has been called Weinergate, when he tweeted a picture of his bulging member to a 21-year-old coed and then lied about his account being hacked, has decided to reenter politics — by running for mayor of New York City.

“I’ve heard he is seriously thinking about getting into a citywide race in 2013 and would like it to be mayor,” said a source who knows Weiner. “In his mind, he’s trying to figure out how to run for mayor.”

The decision may relate to the fact that the $4.5 million he has in his coffers has an expiration date: his funds are good only till the 2013 election.


Perhaps running for mayor is too high profile? Said one political consultant: “The general feeling is that you can’t text pictures of your penis to a girl, then lie about it, then get kicked out of the House and then run for mayor right after. But people believe there is a way for him to run for a lesser office.”

That might be the plan. Weiner is also considering running for Public Advocate. Running against lesser knows such as City Council member Letitia James and Reshma Saujani, and backed with deeper funds than either of them, he might have a chance, despite past shames.

“I still have regrets,” Weiner said last month. “I paid a very high price … I feel great regrets for the people I’ve let down.”


He is clearly quite eager to get into office, nevertheless. He has been meanwhile playing the part of of stay-at-home dad in Queens while his wife, senior Hillary Rodham Clinton aid Huma Abedin, has kept busy with her vigorous job. Locals have seen him on the subway or at the airport awaiting his wife with the 6-month-old in the back seat.

He is still testing the waters on the mayor option, as it’s reported he has sough out other politicians to “talk about the landscape.” If he runs for Public Advocate, it could bolster his popularity in preparation for the 2017 mayoral run.