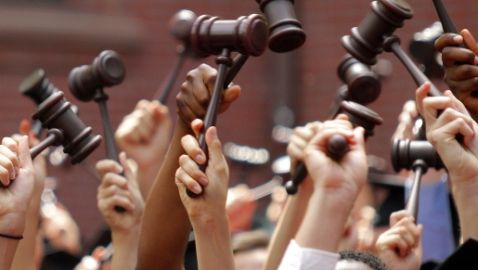 New statistics from NALP-The Association for Legal Career Professionals, show that law graduates from the class of 2011 are seeing their salaries dip. Class of 2011 law graduates are earning a median pay of $60,000, according to the statistics. This is a 5 percent drop from 2010 and a 17 percent drop from 2009. The average pay is $78,653, which is a drop of 15 percent from 2009. The statistics are from graduates who worked at full-time jobs for at least one year.


“This drop in starting salaries, while expected, is surprising in its scope,” NALP executive director James Leipold said in the press release. “Nearly all of the drop can be attributed to the continued erosion of private practice opportunities at the largest law firms.”

The statistics show that close to 60 percent of law graduates from 2011 who were working in private practice were employed by firms that have 50 or fewer lawyers. This number can be compared to 53 percent of 2010 graduates and 46 percent of graduates in 2009. Of the 2011 graduates, just 21 percent of them were employed by law firms that have more than 250 lawyers. This number was 33 percent just two years ago. The statistics for private practice employment include full-time and part-time jobs, temporary and permanent jobs and jobs that do not require passing the bar exam.


The survey also found that a higher number of graduates are flying solo as three percent of all jobs and six percent of law firm jobs were listed as solo practice. These numbers were roughly half of what they are today in 2007 and 2008.

In June, NALP reported that just 65 percent of 2011 law graduates were working in jobs that required passing the bar, which was the lowest percentage ever recorded by the organization. “Obviously these statistics paint a pretty dismal picture,” Leipold said. “In many ways the class of 2011 bore the worst brunt of the impact of the recession on the entry-level legal job market, particularly in the large firm market.”