Got a tip?
Home » Breaking News » Day of Mourning Declared in Wake of Russian Floods 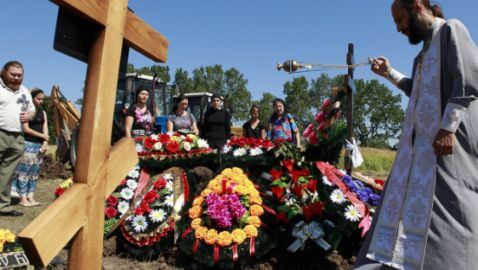 Monday was declared a national day of mourning by Russian President Vladimir Putin in the wake of raging floodwaters that ravaged the southern portion of the country and killed over 170 people. The interior ministry said the official death toll has reached 171, with 159 of those deaths coming in and around the city of Krymsk, which has 57,000 residents. Torrential rains caused a water surge of 23 feet while people slept on Friday night. Ten people died in Gelendzhik and two in Novorossiysk.

“People just ran from their homes because there was a huge wall of water,” one woman said.


Aside from the deceased, 320 people needed medical help, 104 of them having to be hospitalized. The day of mourning will also be for 14 Russian pilgrims who were killed when their bus crashed into a ditch while on the way to a Ukrainian monastery in an incident not related to the flood. There were 29 people who survived the accident.

In Gelendzhik, five people were electrocuted when power lines collapsed into the flood waters. Witnesses said that a man trying to cross a puddle was electrocuted and then four people trying to help him were electrocuted and killed from the current of the wires. Survivors of the floods are not faring any better as they are living without power, water, damaged roads and less than adequate communication. Some 5,000 homes have been flooded with 254 completely destroyed by the water.

“The scale of it is spectacular, to be sure, and very tragic. The water came with such force that it tore up the asphalt,” Krasnodar Gov. Alexander Tkachov said.


Government officials have been making promises to the tens of thousands of people affected by the floods even though more rain is on the horizon. Beginning Monday, each person whose home has been destroyed will be receiving $304 apiece. Tkachov also said at a public meeting that the government will “build … a new home for you in three to four months, before the beginning of the cold period.”

The United States has also promised support after it posted a statement on the Facebook page of the U.S. Embassy of Moscow. The statement said that Washington is “ready to help the Russian government” as the recovery efforts get underway.


It has been reported that a criminal investigation is underway that will determine if Russian officials were negligent for failing to warn citizens of the potential flooding issues. There are also 166,000 people in Chechnya without power from strong winds and heavy rains recently.