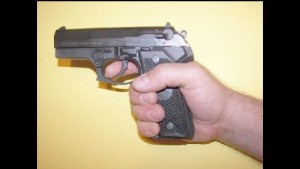 Dark humor can get you fired. Making jokes about shooting your fellow professors, for instance, might cost you your tenure. Take Anthony Chase, who was fired from his tenured position at Nova Southeastern University Shepard Broad Law Center. He made what he later called jokes about bringing his berretta to school, only to find himself fired by mail a bit later.

“I have acquired a large Beretta hand gun and I take my ‘how to shoot’ course Tuesday or Thursday of the week,” an otherwise innocuous email of his had claimed. Fellow professors asked how serious he was about this gun business, and he replied that he had a registered Beretta 8000 and a license to own it. When fired he said in an email that he would remove his items at night “Just trying to avoid being shot. I can shoot pretty good from the window into the parking lot.”

Kudos for keeping up a straight face. It seems, however, that when Nova security officers searched his car and office, there was no gun and in fact Chase never owned a gun or license.


Chase’s attorney William Amlong of Amlong and Amlong attempted to get the school to turn over material from witness interviews. Judge Barry Seltzer ruled against the request, to which Amlong replied, “Instead of conducting this as an HR investigation, they have buried the entire paper trial. It ensures there is no accessibility, whatsoever, into the university’s thought process.”

Seltzer, meanwhile, also denied Novas motion to turn over medical records from his psychiatrist. They are interested because Chase is claiming he was unlawfully discriminated against because of his mental impairment. Chase attorney pointed out that the records are protected under the psychotherapist-patient privilege.

Whether or not a man sees a psychiatrist, in this day and age of campus shootings, does a university have the right to fire a man for making gun threats?