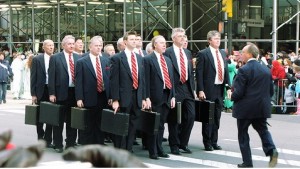 It seems legalese is the new oil to grease the electoral voting machine. After such national outcries as the disputed 2000 presidential election, where the vote was re-called and Bush won by just 537 votes, lawyers have been a key aspect of the voting process. However, Obama’s upped the ante on the lawyer game. He’s accrued 5,800 attorneys — much more than the deciding vote itself of the 2,000 election, and nearly double the 3,2000 lawyers they had on hand in 2004 — to secure the Democratic interest in this upcoming election.

They have an “overwhelming number of attorney’s who have volunteered to assist,” said campaign attorney Ben Ginsberg. “We will have enough lawyers to handle all situations that arise.”

This has far exceeded precedent. What’s the call for so many lawyer — some of them volunteer, some of the high-priced parts of the Democratic team? And why have the Republicans also increased their legal force?


The issue regards in part a system of voter laws established mostly by Republicans to discourage illegal voting. The Democrats are suspicious of their motives:

“The Republican Party and their allies have mapped out their vote suppression campaign as a response to our success in 2008 with grass-roots organization and successful turnout,” said former White House counsel Robert Bauer. “This is their response to defeat: changing the rules of participation so that few participate.”

For their part, Republicans are wishing to only bar illegal voters, and the sorts of laws they are establishing mostly regard voter ID requirements, regulations which are set already in 30 states. It seems both the Republicans and Democrats regard those most effected by careful voting laws as voting Democrat.


Conservative Catherine Engelbrecht has founded True to Vote, an organization motivating up to a million volunteers to serve as poll watchers, aiming to “aggressively pursue fraud reports.”

“Being a poll watcher is an age-old tradition and we’re fortunate that so many volunteers are ready and willing to take a day off, learn what they need to know and help out at the polls,” said Engelbrecht. The volunteers are to “serve as volunteer guardians of the republic, to ensure that procedures at the polls are in keeping with state law.”


Such legal fine-tuning may be relevant, considering the closeness in recent polling. “Litigation has started coming sooner and more vociferously” this year, said Edward Foley, an elections law expert at Ohio State University. “We’re in an era of increased litigiousness over the voting process.”