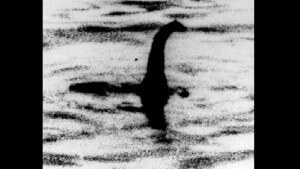 How solid is your scientific theory when you have to resort to citing the Loch Ness Monster to substantiate it? Private schools in Louisiana, and a grade school in Westlake, Louisiana specifically, are planning on using a textbook published by Accelerated Christian Education for their 2012-2013 school year. The book reads:

“Are dinosaurs alive today? Scientists are becoming more convinced of their existence. Have you heard of the Loch Ness Monster in Scotland? ‘Nessie,’ for short has been recorded on sonar from a small submarine, described by eyewitnesses, and photographed by others. Nessie appears to be a plesiosaur.

“Could a fish have developed into a dinosaur? As astonishing as it may seem, many evolutionists theorize that fish evolved into amphibians and amphibians into reptiles. This gradual change from fish to reptiles has no scientific basis. No transitional fossils have been or ever will be discovered because God created each type of fish, amphibian, and reptile as separate, unique animals. Any similarities that exist among them are due to the fact that one Master Craftsman fashioned them all.”

It’s bad enough that the book is using reported testimony to assert the existence of Nessie — they use such “authoritative eyewitnesses” to justify the miracles of the Bible too, but that, at least, is a historical account, not a scientific thesis. But the bigger problem is that even if Nessie was netted and proved to be a plesiosaur, that would not disprove evolution. After all, to stipulate that some of the dinosaurs evolved into mammals or went extinct does not mean they all did. This sort of reasoning is akin to the creationist chestnut “If man evolved from monkeys, why are there still monkeys?” These sorts of questions might fascinate a child, but a solid scientific mind doesn’t even see them as interesting questions.

The Loch Ness monster tour guide Tony Drummond called such use of Nessie as “ridiculous propaganda,” and Bruce Wilson, a research of the American political religious right said that “It has little to do with science as we currently understand. It’s more like medieval scholasticism.”

The textbooks will be exposed to 200,000 students, as Louisiana has a voucher plan to land middle-class students in private school. Perhaps the savvy kids will wonder if similar eyewitness reports of Bigfoot (“the missing link” according to avid yetiologists), or extraterrestrial aliens (beings not stipulated in the Bible) could also be so casually admitted as true.