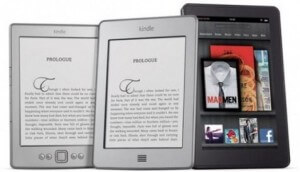 The numbers are in and its clear without a doubt that world media has changed: eBooks now are again outselling hardcover books. The Association of American Publishers (AAP) has compiled data from 1,189 publishers on adult and young adult literature and discovered that ebooks brought in a revenue of $282.3 million in the first quarter of 2012, rising 28.4%, while hardcovers brought in $229.6 million, rising a mere 2.7%. The numbers vary by season, and often hardcovers are in number one, but the general trend is an increase in the ereader public, up from last year in the same quarter.

And while paperbacks continue to lead with $299.8 million in revenue — they is some decline. Last year they were at $335 million. In fact, most of the converts to e-readers come not from hardcover readers but from softcover. Nevertheless, softcover remains the dominant medium, for those who want to continually use a book, and not merely to own it, such as is sometimes the case with an expensive hardcover, or dismiss it, as is common with e-books when they are finished.

The e-reader market is booming in tandem with the popularity of such e-readers as Barnes and Nobles Nook and Amazon’s Kindle, the Ipad and Sony’s e-reader. The convenience of purchasing a book from online and getting it instantly, as opposed to the torturous wait for snail mail delivery, or the frustration of visiting a book store that doesn’t have what you want, has made e-readers the latest craze. And this is so despite the Digital Rights Management on some literature files and the difficulty in sharing a good book with a friend the old fashioned way.