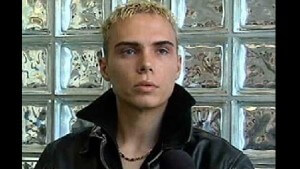 Continuing the latest media theme of real-life zombie apocalypse, albeit without the insinuations that his actions were caused by psychosis inducing bath salts, Canadian porn star Luka Magnotta has rocked our sensibilities by murdering his Chinese lover, videotaping himself eating the victim’s body while also performing sexual acts on it, posting the videos on the internet, and then leaving Canada to disappear somewhere globally. Well, he was found, which is no surprise, since he had been publicly partying in Paris, where he has a lot of connections, and where his face has been widely publicized as part of the global manhunt. He was found in a cafe in Berlin, reading a news story about himself, when a patron flagged a nearby policeman.

It’s all a bit much. Not only was a man who had just murdered and consumed his lover, perhaps in some perverse erotic gesture, been partying with friends as if nothing had happened, but he showed some rational concern while in the Berlin prison, where he is being kept till he is extradited, possibly later this week. He was “afraid he will be attacked by other prisoners,” because the media reports characterize him as a “really, really bad person.” His German-appointed lawyer was also surprised to discover that he was not a “psychopath” as she would have suspected from the news reports, but was “nice and polite.”

Nevertheless, the canny young man was and is very aware of his public image. Not only was he reading about himself when he was caught, but he had been following the story all along, responding to a report that police were going to track him through his cell phone by turning his cell phone off. He also has created 70 Facebook pages for himself, and of course publicized on the net his horrendous crime.


Certain aspects of the story seem difficult to explain. Why did he send Jun Lin’s severed hands and feet to political parties in Ottawa and also to two elementary schools in British Columbia? We can only guess at the logic of such actions, and no doubt investigations over the next few weeks will give some explanation as to what motivated his crimes.

It seems perhaps that the zombie apocalypse fiction, that has so fascinated video game players, comic book readers, and internet surfers in general, in the last decade, and inspired rewrites of Jane Austin and inspired countless manuals on how to “survive the zombies,” has finally inspired some demented people to act them out.