Got a tip?
Home » Breaking News » Video of Pots and Pans Protest Has Gone Viral

A video of protestors posted on Friday afternoon has gone viral. The video is a black and white video that shows protestors ranging in age hitting the streets in Quebec to protest emergency law Bill 78. The bill has been created in an effort to stop huge student protests that have overtaken the streets of Quebec for over 100 days. The bill would limit the ability to protest by having groups get approval from the police to demonstrate. The bill would also restrict where the protests would take place.

The protests began on Thursday night against the bill in the cities of Sorel, Longueuil, Chambly, Repentigny, Trois-Rivieres and Abitibi. One of the protests included hundreds of people clanging pots and pans together in Montreal. The protest was declared illegal by police almost as soon as it began. The police said that the protest violated a municipal bylaw because the police were not informed of the protest route. The police did permit the protest to continue to long as it remained non-violent.


Over the past couple of days, the pots and pans protesting, which have been named the casseroles by witnesses, are an alarm for the nightly march. When the pots and pans begin clanging together at 8 p.m. each night, the regular march begins. 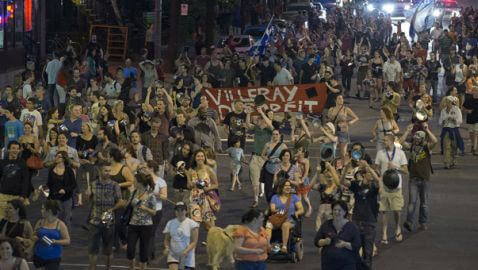