Got a tip?
Home » Legal News » Steve Powell Convicted of 14 Counts Voyeurism but Still Won’t Speak on Disappearance of his Daughter-in-law 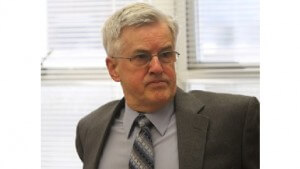 Now that Steve Powell has been convicted of 14 counts of voyeurism, Denise Cox can enjoy some collateral justice. Powell is the father-in-law of missing Utah woman Susan Powell; the pressure is on him to tell what he knows about her disappearance, but so far he has been uncooperative. When investigators searched his house looking for evidence regarding Susan’s disappearance, they discovered a DVD filled with inappropriate images he has taken, including many of Susan nude and semi-nude, and in the latest case, countless photos of the neighbor girls, who were 8 and 10 year old at the time, bathing or using the bathroom.

“It’s sweet justice,” said Denise Cox. “Now I can concentrate on finding my sister.” Indeed, the lawyer who represented the neighborhood girls, Anne Bremner, and who also represents Susan Powell’s family, wants to use the voyeurism charges as a wedge to get the reluctant Steve Powell to speak about Susan.

“You just don’t want this guy to be in a position where he can prosper, ” said Bremner. “It’s yet another way to keep pressure on him.”


The ambiguity surrounding Susan’s disappearance has of course deeply frustrated everybody involved. Her blood had been found in the family home, along with a handwritten note in which she identified her husband, Josh Powell, as a physical threat. Nevertheless, his suicide this year, in which he also killed both of their children, did not lay to rest questions as to what happened to Susan and why.

Susan, however, was not the topic of the voyeurism trial; the judge clearly instructed the lawyers not to reference her as she was not a victim. One reason Steve Powell was not also charged with voyeurism regarding the inappropriate pictures had had of Susan was that there is some ambiguity in Utah’s laws regarding the statute of limitations. Prosecutors have three years subsequent to the victim knowing they have been the subject of voyeurism to file charges. Such stipulations are of course out of place in the case of Susan Powell, whose whereabouts are unknown.

“We can’t prove Susan Powel ever knew Steven Powell was filming her,” said her prosecutors. “She’s not here.”


Though many were relieved that some form of justice was brought against Steve Powell, Alina, his daughter, for one, was upset that the disappearance has cost her so much already.

“My family automatically was convicted 2 1/2 years ago,” she said after the trial. She regards her father has having been a “great father,” and believes media attention has distorted his true character.