Got a tip?
Home » Legal News » Arizona Gunman Kills Four Then Self 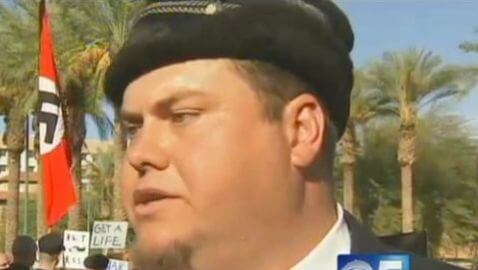 Police believe that a former Marine who had ties to Minutemen and neo-Nazi groups shot four people and then killed himself in a suburban Phoenix home. Sgt. Bill Balafas, a spokesman for the Gilbert police, said on Thursday that they think Jason Todd Ready was the gunman in the Wednesday shooting at a home in Gilbert. Ready was a resident of the home along with a woman who was one of the people killed in the incident. Others killed include Readyâ€™s girlfriend and the womanâ€™s daughter and granddaughter.

Ready had organized a militia in the desert of Arizona that dealt with finding illegal immigrants and drug smugglers. He was known as J.T. and was in charge of an outfit called the U.S. Border guard. The outfit dressed in military fatigues and body armor. They were armed with assault rifles on their patrols.


The other victims in the shooting were 15-month-old Lily Lynn Mederos; 23-year-old Amber Nieve Mederos; 47-year-old Lisa Lynn Mederos and 24-year-old Jim Franklin Hiott. Balafas said that the evidence in the case points to the shooting stemming from a domestic violence incident. Two handguns and a shotgun were found by officers. Also removed from the home were military-grade ordnance, munitions and two barrels of chemicals. Those items were removed by the Joint Terrorism Task Force and the FBI.

The bodies of the two women were found inside the home while the bodies of Hiott and Ready were found outdoors. The toddler was found inside and showing signs of life but died later at the hospital. A teenager who was in the house said there was an argument and then gunshots. The teen exited a back room and discovered the bodies. Three hours following the shooting a man walked up to the crime scene, pointed to the house, and said, “I have a daughter who lives in that house.” Officers took him into the house and out of view. Minutes later witnesses could hear a loud cry. He then left in tears with the officers.

“We’re not going to sit around and wait for the government anymore,” Ready said during a 2010 interview. “This is what our Founding Fathers did.”


Balafas said that police officers had been called to the home in the past for other domestic disputes. Balafas could not provide details of those police calls or if Ready was involved in any of them. Gary Davis, a member of the neighborhood, said, “There’s no excuse for taking a child’s life. Nothing ever happens in this neighborhood. It’s a shock to us.”