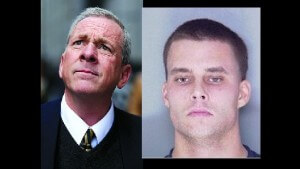 A priest accused of child endangerment had admitted in 2008 to watching pornography with a 14-year-old boy under his care, as well as sharing a bed with the boy, but denies that the accuser, now a former marine in his 30’s, is correct in accusing the priest of also pressing his genitals against the boy’s buttocks.

“No, nothing happened physical between us — nothing,” said Rev. James Brennan, the priest in question, who otherwise admits to the charges: “Did I allow it to happen? Yes. I take full responsibilities for it,” he had said in 2008, during his canonical trial, but denied he ever touched or exposed himself to the boy, either at the boys overnight visit in 1996 or at any other time. “I was just devastated,” regarding the accusations of sexual abuse, he said.

The accusers was discharged from the Marines due to mental illness. On testimony he referred back to 1996, “I was a little boy. I didn’t know what to do,” he sobbed. He also said “I was scared. I was afraid that if I said no [to sleeping in the same bed as him], he’d kill me or something.”


“No, nothing happened physically between us — nothing,” insisted Brennan. He was removed from active ministry after the allegations first came up in 2006.

A grand jury is also investigating whether Monsignor Kevin Quirk, who presided over the 2008 canonical trial of Brennan, failed to investigate claims of child sexual abuse.