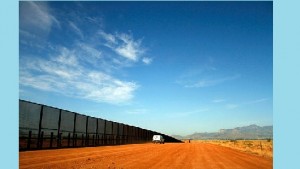 The Supreme Court seems surprisingly sympathetic to Arizona’s side in the case of Arizona versus the United States of America, where the state’s exacting immigration laws are under question. The justices made many comments regarded Arizona’s right to protect its borders, though of the four controversial provisions to Arizona’s law, only one seemed favored: the law that arrested persons must provide papers that show they are legal citizens.

U.S. Solicitor General Donald Verrelli is representing the U.S., and as is typical for him, got interrupted a lot. Verrilli at one point cited the “problem of harassment,” mentioning the 2 million Latinos who live in Arizona, of which only 400,000 are illegal, at which point Chief Justice Scalia cut him off —

“Sounds like racial profiling to me,” said Scalia. As there are already civil rights cases open challenging the law, the Supreme Court has made it clear that it is only considering the problem of Federal versus State jurisdiction.


The question regards whether States have the right to enforce their own immigration laws, considering federal law handles illegal immigration.

Scalia sarcastically summed up the federal government’s argument as claiming “the state has no power to close its borders to people who have no right to be there.” Of its 370-mile border with Mexico, Arizona has struggled to keep immigrants out. Paul Clement, who is representing Arizona, said that the state:


“Bears a disproportionate share of the costs of illegal immigrants.”

Eight justices are presiding over the case, as Justice Elena Kagan has stepped aside, due to her previous work on this topic before becoming a Justice of the Supreme Court. A vote of 4-4 would uphold the ruling of the 9th Circuit’s court to block parts of the law. The Supreme Court is expected to make its decision on this matter by late June.

Paralegal / Legal Assistant Please do not apply unless you have 3 years + in Family Law / Divorce o...