Got a tip?
Home » Breaking News » Pedophile the Latest to Make FBIs Ten Most Wanted 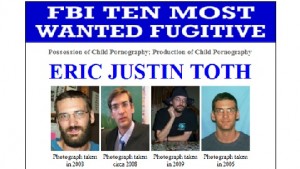 Now that Osama Bin Laden has been shot during the U.S. raid in Pakistan in May of 2011, and now that James “Whitey” Bulger has been apprehended, the FBI’s Ten Most Wanted Fugitives List is greetings some new faces, the latest of which is Eric Justin Toth. Toth, AKA David Bossone, taught third grade at National Cathedral’s Beauvoir School in Washington D.C. and was also a camp counselor, until a school camera he used was discovered by another teacher to contain child pornography. In 2008, he was escorted off the school campus, never to be seen by them again.

But he has been twice indicted for the possession of child pornography, and now the FBI is taken steps to speed his apprehension.

“We are very concerned that he may be in contact with other children, so we are asking for the public’s assistance to help us capture him,” said FBI Supervisory Special Agent Jacqueline Maguire.


While his alleged crimes are doubtless disgusting, some find it surprising that Thoth made the same list as Osama Bin Laden and “Whitey” Bulger, the first a notorious terrorist responsible for the deaths of thousands, the other a vicious gangster. “There is no comparison to be made between Toth and bin Laden,” said Maguire. “Although Eric Toth has not murdered anyone and he is not an international terrorist, that does not mean he isn’t dangerous.”

Toth is an educated man, who made the dean’s list at his alma mater, Perdue, in the fall of his 2002 and 2004 semesters. He is internet savvy and described as a compute expert by the FBI, who al warn that “he may advertise as a tutor or a male nanny.”

Toth is the 495 person to make the Ten Top Most Wanted Fugitives List, since it was started in 1950. The list has spurred the cooperation of the public with the capture of 153 criminals of the 465 who have been found.