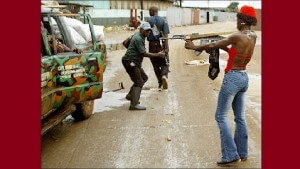 Africa is still struggling with gay rights laws, and in Liberia it just got uglier. In response to those campaigning for gay rights and the right to gay marriage, the Movement Against Gays in Liberia, or MOGAL, has signed and distributed a hit list. It reads:

“Having conducted a comprehensive investigation, we are convinced that the below listed individuals are gays or supporters of the club who don’t mean well for our country. Therefore, we have agreed to go after them using all means in life.”

Though no member of the group has individually signed, an affiliate, Moses Tapleh, who resides where the flier was distributed, has spoken on what it means:


“We will get to them one by one,” Tapleh said. “They want to spoil our country.”

Get them with what? How? He mentioned “dangerous punishments,” such as “flogging and death.”

Such draconian and illegal edicts fall in the shadow of February’s legislation that made homosexuality punishable, following President Ellen Johnson Sirleaf’s vow to uphold the currently active law criminalizing “voluntary sodomy.” In a similar tone, Robert Kpadeh, a minister of the Ministry of Information, denied knowing of the fliers, but blandly said that they are “open to receiving complaints” about it.


Though the U.S. has exerted indirect influence to shepherd African countries into recognizing gay rights, David Bruce Wharton, deputy assistant secretary for publicly diplomacy in the State Department’s Bureau of African Affairs, explained that they were trying to avoid being viewed as “seeking to impose Western values on more conservative African societies.”

South Africa is the only nation in the continent that recognizes rights to gay marriage, but even there the issue is a heated struggle, with such misguided acts of violence as “corrective” gang rapes on lesbians.


The Liberian flier stated its message in Christian terms: “Let these individuals be aware that we are coming after them soon. We urge them to also begin saying their Lord’s prayers.”