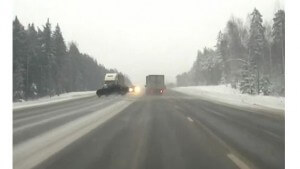 In a new YouTube that borders on a Faces of Death episode, a dashboard cam happens to witness a Nissan Navara, driving in Russian winter conditions, hit a bit of slush down the intersection of the two-way highway, swerve into the truck on its left in a desperate attempt to straighten out his vehicle, only to jackknife to the right into oncoming traffic, when a semi-truck, unable to avoid collision, not so much hits the Nissan as explodes it. (This video is not for the weak of stomach).

The video is especially shocking not in that it is especially gory (the video ends when the drivers of the car with dashboard cam cry out in amazement and slow down their car to investigate), but of course in that, unlike the cinema, where we’ve seen this sort of thing staged a thousand times, this is real life, real people, and the driver of the Nissan may not have survived the crash.

Without any more context than the 30 seconds of traffic, it is hard to fill in the missing pieces of the puzzle, such as why did the car have a dash-board cam (the voices of the passengers do not sound like police), and also who got hurt in the crash? At least three vehicles were seriously damaged. Being YouTube, such context may never be filled in, and for many of us, the images will never be forgotten.