Got a tip?
Home » Home » Make that 7: Dewey Loses One More Since Friday 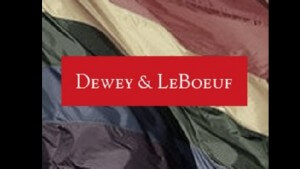 Dewey lost six partners Friday to Sutherland, and that’s not all: it looks like one more is jumping ship, showing that despite their claims to the contrary, they seems to be suffering the losses the rumors predicted. As of Friday, 37 partners have left the law firm of Dewey and LeBoeuf this year.

It was devastating enough for Dewey when six partners who announced Friday that they are leaving for Sutherland Asbill & Brennan, including John Pruitt and Cynthia Shoss, co-heads of the New York office; Jeffrey Mace, head of London office; and Dwyer, who has been at the firm for 30 years, Dewey is also bidding farewell to Sean Gorman.

Sean Gorman, the managing partner of Dewey’s Houston office, announced Friday that he is leaving, saying “My decision to leave Dewey & LeBoeuf was a decision to leave big law, not to leave because of any financial strain. If Dewey was still making the huge profits it made in 2007, before the recession, I would still have made the decision to go.” He is leaving for Ahmad, Zavitsanos, Anaipakos, Alavi & Mensing, we are joyful to receive him.


Dewey is taking it in stride. They have already hired spin master Michael Sitrick to manage the company image.

“We have said all along that with change more departures were expected,” said the firm in a statement. “These additional departures, while regrettable, we do not believe will change the conclusion that the firm is poised to have a very good economic year. We have a strong and deep bench as is evidenced by the results our professionals are producing for our clients and the firm.”

The firm intends to keep on track with their goals: “These departures will not have a material impact on firm finances this year, nor will it affect the compensation budge on a net basis after deducting the departing partner comps.”


This may be more than bravado. The firm is advising eBay on its Rent.com unit, and advising Dell computers on its $1.25 billion SonicWall purchase, among handling other new clients.