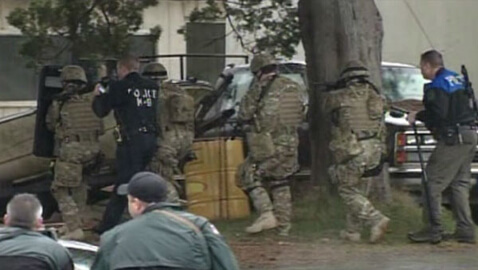 Violence in Montesano county courthouse in Washington State led to lockdown of public buildings and schools within the county on Friday. Michael Thomas, the gunman, has been identified but the SWAT teams are still trying to apprehend him. After shooting the woman detective within the courthouse, the gunman stabbed her in the neck, then attacked the County Superior Court Judge Dave Edwards and stabbed him in the neck, too.

Primary investigations have failed to ascertain whether Thomas had an appointment at the courthouse. Observers described the gunman as being in his 20s, well-dressed and carrying a briefcase. Thomas had a handgun and a knife concealed on him.

The judge was a former prosecuting attorney. He was rushed to the community hospital after the attack and has been declared by hospital authorities as being in a satisfactory condition. Community Hospital spokesman David Quigg reported the judge to be ŌĆ£conscious and comfortable.ŌĆØ


Washington State Trooper Russ Winger reported the incident to Reuters. According to him the unidentified detective was in stable condition, though the reason of involvement of the judge in the altercation remains unascertained.

Fearing a gunman on the loose public buildings, schools, and small enterprises were on alert and most locked down. When the media tried to contact Charles Wallace, the Deputy Director of Emergency Management for the County SheriffŌĆÖs department, it was found that he had applied emergency management first to his own office and locked everything down. He told the media that he had no information on the situation as he was in lockdown himself.

It seems incidents of trigger-happy gunmen on or about court premises are on the rise. Earlier this week there had been reports of a gunman outside a courthouse in Oklahoma who started to shoot in the air without any reason. Then he entered a battle with the police wounding a deputy and a civilian bystander.


A Grays Harbor County SheriffŌĆÖs spokesman reaffirmed that following the incident all public buildings in Montesano, a community of about 4000 people had been placed on lockdown. The community hospital was also locked down as well as schools in the district.

The owner of Savory Faire Bakery, near the courthouse at Montesano told the media that he had placed the business on lockdown after one of his employees told him that her husband had seen a gunman fleeing from the courthouse.