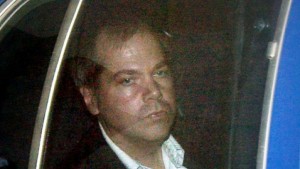 Hearings continue on determining whether John Hinckley, Jr., the man who shot President Reagan and three others in an insane scheme to impress Jodie Foster, has recovered enough mental grounding to bump up his allowance of visiting his mother from 10 days each month to 24 days each month. Hinckley’s attorneys regard this as a step toward integrating Hinckley back into society, whereas psychiatric investigator Dr. Robert Phillips sees evidence that this would be the wrong move. He said:

“We are talking about putting someone in a community for extended time who has been institutionalized for 30 years for trying to assassinate the president.” Phillips’ more specific objections focus on Hinckley’s relationship with women; of his two attempted relationships these last few years, one was an effort to “turn the head” of a married staff member at a mental facility where Hinckley works a few hours each week, which Phillips called “either fantasy or abject narcissism.” The other attempt was with a bipolar woman who, though psychotic, was physically affectionate with Hinckley. Phillips regarded neither of these attempts as evidence of rehabilitation, and since Hinckley’s assassination attempt was a misguided attempt to impress a woman, he thinks giving freedoms to Hinckley may prove disastrous.

Hinckley is officially diagnosed as having major depression with psychotic features and narcissism disorder. The crime for which he is notorious was preceded by him watching the 1976 movie Taxi Driver, in which the protagonist plots a presidential assassination and saves child-prostitute played by Jodi Foster; he watched it fifteen times in a row. He also started collecting information regarding Oswald’s assassination of John F. Kennedy. This culminated in a psychotic outburst on March 30, 1981 when Hinckley shot a revolver six times at Reagan, whom he wounded, along with press secretary James Brady, police officer Thomas Delahanty, and Secret Service agent Timothy McCarthy. All the men recovered, but Brady’s head wound has paralyzed half his body and he is to this day bound to a wheel chair.


Among those concerned about Hinckley’s freedom is Michael Reagan, the president’s son, who said “It’s outrageous I think to all of us that somebody who would try to kill the leader of the free world ….would be able to finally be freed to have these unsupervised visits.”

Dr. Robert Phillips is more concerned with the issues Hinckley is presently dealing with. On one of his visits to his mother’s hometown, he told his mother he was going to the theater, but instead visited the bookstore. These repeated visits to Barnes and Nobles have disturbed agent Clickner, who was assigned to conduct surveillance on Hinckley. He said that Hinckley seemed interested in certain books regarding Reagan’s attempted assassination and about presidential assassinations in general. Hinckley’s attorney, Barry Levine, counters that Hinckley paused over a shelf that had a wide variety of materials, that he has not paid especial interest to such books on his other visits, and that he ultimately bought a book on Elvis Presley and Bob Dylan.

Hinckley’s proceedings are schedule to be completed by the end of the week.