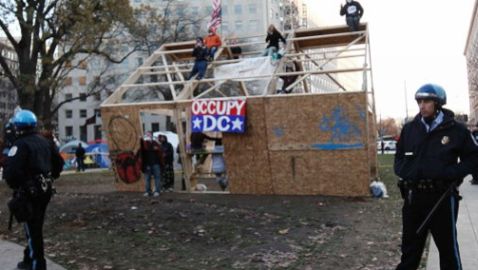 Tensions continue to rise between law enforcement officials and Occupy D.C. protests. Noonday Monday is the deadline for enforcement of the overnight camping ban. As patience wanes and tempers rise, someone was bound to be injured in the chaos. And sure enough, it happened.

Sunday afternoon was a temper filled day for many protestors. Anger flared as a fellow protestor was handcuffed by two police officers and received the painful shock of a Taser by a third official. The rage of the protestors increased even more, saying the the officers used excessive force.


Police that were at the scene confirmed the Taser was used on an individual, but would not comply to give further details of the event.

As the Park Police passed out flyers to protestors, one entered into the tent of a demonstrator known as Lash. He become incredible angry at the intrusion, which led to his arrest and electric shock.

Raleigh, NC researcher, Tracy Keith, who has been at the square for several months, witnessed the whole account. Lash told the intruding officials, “Get out of here, get out of my tent. You’ve already given us enough of these.” According to Keith, Lash then left his tent and began ripping up the police flyers around his encampment. The even escalated from there.


A member of the District, Ellie Milne, 23, also thought that the officers used excessive force during the arrest of Lash. She said, “My mother is a police officer, and I grew up trusting the police, but this was blatant police brutality.”

Milne went one to account that the police then dragged Lash out of the park, ignoring his pleas for an ambulance. Instead of seeking medical attention for him, the shoved him in the back of a police car.


A former journalist who presently works for a nonprofit group, Kathleen G. Sutcliffe, gives her feeling about all the negative attention around Occupy D.C. groups. She says, “A lot of media attention of the movement has focused on confrontation. But the real reason we’re here is, we have a deep hope – and this may sound like a cliche – that another world is possible. It’s not about scuffling.”

The Monday deadline has caused much tension. Perhaps the police used excessive force, but it’s equally possible that the protestor was not showing any tolerance and respect for the authorities. Delegate Eleanor Holmes Norton wrote a statement regarding this topic. In his written statement he requests that protestors show officials “the same respect and civility that the National Park Service and the District of Columbia have shown to Occupy D.C.”