Got a tip?
Home » Weird News » Should Public Transit Have Wider Seats To Accommodate Larger Backsides? 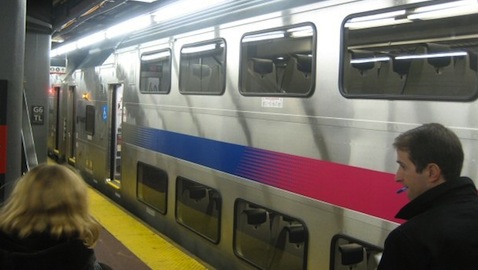 The age-old issue still rears its ugly head as Americans continue to grow in size, but public transit seats remain the same size. It’s not a matter of ability, but of convenience. In today’s society, anything from toilet seats to love seats can be built larger to accommodate wider profiles, and that includes the ability to widen seats on public transportation.

Some transit companies have gotten on board with this ever-growing need, while others continue to place their own greed above the comfort of the passengers. The New Jersey Transit is one of the companies listening to the people. It is in the works to create double-decker train cars that contain seats 2.2 inches wider than the present 17.55-inch seats filling the cars now. This will mean having two seats on each side of the car instead of two seats on one side and three seats on another.


According to Amtrak spokesman, Cliff Cole, Amtrak plans to create “designs that will be able to accommodate the larger-sized passengers” next year on its 25 new dining cars. This will make things much more comfortable for heavier passengers that come on board.

However, not all transit companies are working with the needs of heavier passengers. Marcia Ely, assistant director of the New York Transit Museum, says that the width of New York City subway seating has only gotten smaller.

Carol Greitzer notes the narrow size of the bucket seats this winter by saying, “It’s particularly annoying now when they’re wearing winter clothing. People are much bigger and heavier than they used to be.” And this is true. With the continued increase of steroids and other unhealthy chemicals in food, Americans are becoming much larger than in recent decades. This development of the people must begin to receive accommodations from people who have the power to make things more comfortable.


Direcot of National Center for Accessible Transportation at Oregon State University, Katharine Hunter-Zaworski, says, “It’s becoming much more of an issue for transportation, trains, busses. You can only make the trains so wide.

The width is only one of the great concerns regarding heavier passengers. Seats also need greater lumbar support, and safety regarding crash-test standards.


Martin Schroeder expresses his concern as the chief engineer for the American Public Transport Association, “It’s clear that the US population is getting heavier. We are trying to get our hands on that and figure out what is the best average weight to use.

Description Are you working in a job in which you feel undervalued and not part of a collective t...

The law firm of Leitner Williams Dooley Napolitan, PLLC, has an immediate opening for an Associate A...