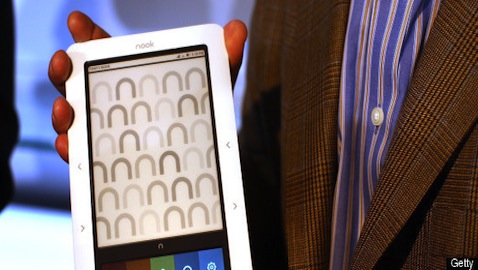 On Thursday, Barnes & Noble said that it is trying to find a possible spin-off of the unit that makes its Nook e-reader, which is falling behind on the competitors such as Amazon’s Kindle line even as the sales rose during this holiday season. The announcement came during the time that the company had lowered its 2012 sales forecasted for the Nook line from $1.8 billion to $1.5 billion.

One of the spokeswoman from Barnes & Noble did not respond to a plea for information on which firm is advising on a possible spin-off.


Last May, it was reported that Carvath, Swaine & Moore was advising the company on a proposed sale to Liberty Media Corporation under which the Liberty was offering $17 a share in the exchange for a 70 percent stake in the company in a deal that was valued to the bookseller at roughly $1 million; the Barnes & Noble founding chairman Leanard Riggio would have retained almost 30 percent of the equity stake under the transaction’s terms.

O’Melveny & Myers advised Riggio on the proposed takeover, while Baker Botts represent Liberty, all of this is according to a prior reporting.

Within just several months, all of Liberty’s concerns on the stock market’s volatility had helped torpedo that deal, and the company decided instead to buy a minority stake in the bookseller for $204 million. Cravath and Baker Botts also advised on the new transaction, all according to the filings with the Securities and Exchange Commission. Citing the entertainment conglomerate’s prior interest in Barnes & Noble, TheStreet.com reported back on Thursday that Liberty could have been the most likely of buyers for the Nook unit.


A spokeswoman for Cravath did not return a request for a comment also on Thursday. An O’Melveny spokeswoman also declined to say anything.

The news of the new potential spin-off comes just a month before Barnes & Noble is set to defend itself in the International Trade Commission against accusations that the Nook infringes five of the Microsoft Corporation patents.


Back in November it was reported that the bookseller had enlisted a stable of litigators to counter Microsoft, which is asking the ITC for an exclusionary order to ban the Nook from being imported here to the United States. (Microsoft, which had filed their ITC complaint against Barnes & Noble back in March, has sued Barnes & Noble over the same patents in federal district court up in Seattle. The case has stayed pending the outcome for the ITC action.)

For the ITC proceedings Barnes & Noble has assembled a legal team that includes Boies, Schiller & Flexner founding the partner David Boises, as well as the lawyers from Quinn Emanuel Urquhart & Sullivan; Cravath’ and Keyon & Keyon. Microsoft is also represented at the ITC by Sidley Austin, Orrick Herrington & Sutcliffe and Woodcock Washburn.