Got a tip?
Home » Celebrity News » The Return of Orly Taitz 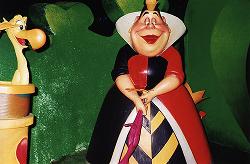 She’s baaaaack! Everyone’s favorite birther, lawyer and dentist Orly Taitz, has filed pro se in a federal court in Washington DC. In the suit, Dr. Orly Taitz v. Barack Hussein Obama, Taitz reiterates her claim that President Obama is not a US citizen and demands production of his birth certificate. She alleges that AG Holder has ignored her accusations, playing a “game of hide and seek,” she says, that’s “infantile at best and treasonous at worst.”

If this suit fails to bring satisfaction, as seems likely, Taitz has another plan. On her blog (link omitted due to malware on the site) Taitz has said she is considering a run for office. Her plan is to run for either Attorney General or Secretary of State in California so that she can use the office to launch another lawsuit against Obama.

Here’s what she has to say about it:


Severalof my supporters have recommended that I run for an office of the Secretary of State of Ca or Attorney General. As a secretary of State or attorney general I will have standing to try in court issues that were tabu to all of us as individuals. Here is a situation:
1. we don’t need 50 secretaries of state or 50 Attorney Generals suing Obama. If only one sues and gets discovery, we are done
2. in CA the democrat running for this office is an incumbent Deborah Bowen, who was worthless, didn’t check Obama’s records, and whom I sued on behalf of ambassador Keyes in Keyes et al v Bowen et al andon behalf of vice presidential candidate Gail Lightfoot in Lightfoot v Bowen. I reached the Supreme Court. Chief Justice John Roberts decided to hear the case in the conference of all 9 justices on January 23, 2009. On January 21st, right after the inauguration somebody erased the case from the docket. they re-entered it on the 22nd and during the conference on the 23rd decided not to proceed with oral argument. Later, when I talked to Justice Scalia, he didn’t remember anything about the case.
3. Republican running for office is Damon Dunn, who admitted to never even vote until last year. He was a football player and later he was in real estate. The only reason he was endorsed so far, is because he is an African American, and Republicans want to have an African American to show diversity. He admits to having no knowledge or experience with law, elections or election law
4. In terms of the office of the Attorney General, incumbent Jerry Brown is not running. From both parties we have state legislators, who termed out and are looking for a new seat to warm. Considering billions of dollars of debt in CA, all of the state legislators are lousy.
5. I will need to raise 3-4 thousand dollars to start with, probably I will need about 100,000 from start to finish
6. I will need to set a separate account, I will need a campaign manager, volunteers.
I need your input. you can e-mail me at dr_taitz@yahoo.com. put running for office in the heading

Holzer Patel Drennan is looking for a Senior Business / Transactional Attorney with 5+ years of expe...

A lot of great lawyers have “hung their own shingle” . . . only to decide that they are ...