Got a tip?
Home » Home » Judges Plead Guilty to Corruption 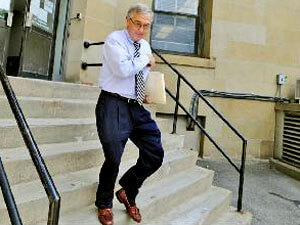 The plea agreements for Luzerne County President Judge Mark Ciavarella and Senior Judge Michael Conahan call for sentences of more than seven years in prison. Both have agreed to step down from the bench.

The judges took kickbacks between 2003 and 2007 in exchange for guaranteeing the placement of juvenile offenders into facilities operated by PA Child Care and Western PA Child Care LLC. In some cases, Ciavarella ordered children into detention even when juvenile probation officers did not recommend it.


“They sold their oaths of offices to the highest bidders,” said Deron Roberts, chief of the FBI’s Scranton office.

US Attorney Martin Carlson said the charges were “the first developments in an ongoing investigation” into public corruption at the courthouse in Wilkes-Barre.

PA Child Care and Western PA Child Care have not been charged with wrongdoing, for some bizarre reason beyond the comprehension of the human intellect.


County District Attorney Jackie Musto Carroll said her office would review cases in which offenders might have been improperly placed into juvenile detention.

The Juvenile Law Center, a Philadelphia-based advocacy group, complained last year to the state Supreme Court about the treatment of children in Luzerne County juvenile court, asking for the nullification of decisions in hundreds of cases. Juveniles were often denied their constitutional right to lawyers and were disproportionately sentenced to ill-advised, out-of-home placements, the group said.