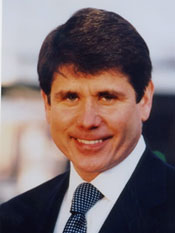 The prosecutor in Illinois Governor Rod Blagojevich’s pending impeachment trial in the state Senate said today he will call more than a dozen witnesses.

Blagojevich, however, did not respond to a discovery deadline seeking witnesses, documents and other materials that would be used in his defense, the Chicago Tribune reported.

The impeachment trial is scheduled to begin Monday. If found guilty of corruption charges — including trying to peddle President Barack Obama’s then-vacant US seat — Blagojevich would be removed from the Governor’s office.


David Ellis, the designated House prosecutor, asked the state Senate to approve subpoenas for a witness FBI agent Daniel Cain, author of the federal affidavit filed along with federal criminal charges against Blagojevich resulting in his Dec. 9 arrest.

The governor has maintained his innocence of both federal charges and charges contained in the state House articles of impeachment.

Meanwhile, the Chicago Sun-Times reported Blagojevich spent $2.6 million of his campaign funds on legal fees, most to pay criminal defense lawyers. His most recent expenditures — a $500,000 payment to the firm of lawyer Edward Genson and $100,000 to the firm of Sheldon Sorosky — was made Dec. 18, a campaign finance report filed late Tuesday revealed.


The governor also paid nearly $1.8M to Winston & Strawn since December 2003, records show. About half of that was spent last July for overdue bills.

In response to the prosecutor just hours ago, Blagojevich released a statement that the Senate impeachment trial is unfair and denies him the right to due process.


The two-term governor of Illinios, Blagojevich says he is being denied the right to call witnesses. The governor has repeatedly denied federal allegations that he sought to profit politically and personally from official acts.

The House and Senate have agreed not to seek witnesses or information that could compromise the ongoing federal investigation. A Fitzgerald spokesman declined further comment.