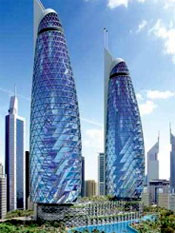 In the past few years, international law firms have been opening up offices in Dubai. Now, US firms, like Weil Gotshal Manges, and Kilpatrick Stockton, have announced plans to open up offices there.

They join other prominent firms such as Clifford Chance

, and Latham & Watkins, who all have offices in places like Dubai and Abu Dhabi.

However, as oil prices near $30 a barrel, and DubaiŌĆÖs real estate market collapses, prices on real estate have dropped by 30%.┬Ā That drop has hurt those firms who have set up office in the United Arab Emirate country.


Dubai has the largest population among the UAE and is determined to become the financial center of the Middle East. Dubai set up the Dubai International Financial Centre (DIFC) in 2002 in order to benefit economic development in the region. Essentially, the DIFC is a 110-acre tax haven that encourages foreign investment. There is a zero rate tax on income and profits.

Tuer also called it a ŌĆ£very expensive marketŌĆØ and noted that this may keep Canadian firms from ever opening up there.


Hugh MacKinnon, chairman and CEO of Bennett Jones in Toronto, claimed that Canadian law firms tend to stick to their core markets like London or New York. He also noted that a law firm neednŌĆÖt possess a foreign office to do work in a particular region. He claimed that Canadians excel at working offshore.