Got a tip?
Home » Home » Attorney Cannot Be Prosecuted Over Bad Advice 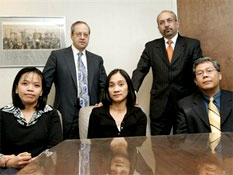 A lawyer facing criminal charges for advising 10 nurses they could quit their jobs at a Long Island, NY nursing facility gave “objectively reasonable” advice and cannot be prosecuted, a Brooklyn appeals panel has ruled.

In a unanimous decision, the Appellate Division, 2nd Department, ruled that District Attorney Thomas J. Spota of Suffolk County must halt his prosecution of attorney Felix Vinluan and his clients.


“We cannot conclude that an attorney who advises a client to take an action that he or she, in good faith, believes to be legal, loses the protection of the First Amendment if his or her advice is later determined to be incorrect,” wrote Justice Randall T. Eng. “Indeed, it would eviscerate the right to give and receive legal counsel with respect to potential criminal liability if an attorney could be charged with conspiracy and solicitation whenever a District Attorney disagreed with that advice.”

The nurses were recruited as a group from the Philippines by SentosaCare, which operates the Avalon Gardens Rehabilitation and Health Care Center in Smithtown, New York.

In April 2006, they left their posts in protest over job conditions. The district attorney accused the nurses of abandoning their patients by leaving their shifts without giving administrators enough notice to find replacements.

Vinluan, after hearing the nurses’ complaints about substandard pay, poor living conditions, changes in work shifts and other alleged violations of their contracts, “advised them that they could resign if they wanted to as their contracts were already breached.”


Justice Eng pointed out that the nurses “did not abandon their posts in the middle of their shifts.” Rather they resigned “after the completion of their shifts, when the pediatric patients at Avalon Gardens were under the care of other nurses and staff members.”

Eng also noted that the state Education Department ultimately cleared the nurses of professional misconduct after taking into account that “no children were deprived of nursing care.”

Since prosecutors did not dispute that Vinluan acted in good faith, Eng held, the attorney could not be prosecuted for giving legal advice to commit an act, which, under the circumstances, was not a crime.