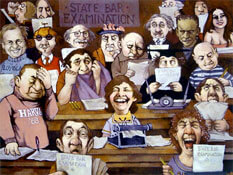 Nineteen US states are positioned to implement the uniform bar exam, or UBE. The exam, designed to create a consistent competency measure for admission to practice, would be a three-component test, all with the same questions, administered in each jurisdiction.

Although many states historically have held onto their testing autonomy by developing some of their own exam questions and by using their own pass scores, legal professionals say that a single exam – such as those utilized for physicians, architects and accountants – is an increasing likelihood for lawyers.

The three components, all developed by the National Conference of Bar Examiners, are: the MBE; the Multistate Performance Test; and the Multistate Essay Examination. The uniform test score would include performance on these components only and would not incorporate a state law portion.

The 19 jurisdictions that could most readily begin using the uniform exam already include the three components developed by the National Conference on their bar exams. Illinois, Missouri and Colorado are among those states.

Proponents of a uniform bar exam assert that it would relieve states of the costs of developing their own tests and could provide higher-quality questions than on state-developed tests. They also say that a uniform exam would help ensure that attorneys from different parts of the country had the same level of competency.