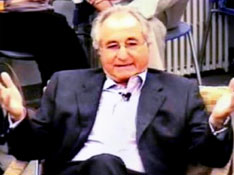 The Securities Investor Protection Corporation and the trustee handling the liquidation of Bernard L. Madoff Investment Securities LLC have mailed more than 8,000 claim forms to customers who lost money in the alleged investment fraud scheme of Bernard Madoff.

Madoff is accused of running a giant Ponzi scheme that could have duped investors out of as much as $50 billion.

The bankruptcy court overseeing the liquidation has set an initial deadline of March 4th for claims to be filed. Any forms received between March 4th and July 2nd will be subject to delayed processing and possibly less-than-favorable satisfaction of terms.


Forms and instructions are also available on the SIPC’s Web site.

Trustee Irving Picard will oversee the liquidation of assets from Madoff’s investment firm, as the SIPC attempts to help investors recoup their money. The SIPC was created by Congress in 1970 to protect investors when a brokerage firm fails. Funds can be used to satisfy the remaining claims of each customer up to a maximum of $500,000. The figure includes a maximum of up to $100,000 on claims for cash.

Aside from recovering money through the liquidation of Madoff’s investment firm and the SIPC, investors could get some money back if some of Madoff’s personal assets are sold. Last week, Madoff provided a list of his personal assets to the SEC. Details of the asset list were not disclosed.


Madoff’s personal wealth is said to be substantial. He has mansions in the Hamptons and Palm Beach, a penthouse in Manhattan and a handful of luxury yachts. His firm operated proprietary stock trading desks in New York and London that were supposedly investing the family’s vast fortune.

Madoff, 70, a former Nasdaq stock market chairman, is accused of running a scheme that paid fictitious returns to certain investors out of the principal received from others. Madoff remains under house arrest in his apartment in New York as part of an earlier bail agreement.